It’s March 2018. Comrade K1987 Yana is here to report that she had been manipulated by Big Brother. In this day and age, he comes not only in a shape of Donald Trump but also gets an access to Google and Facebook empires. Using the social media strategy Big Brother informed me that it is the time to face each other. I accepted the challenge despite the fact that I encountered Big Brother before through book pages, movie titles and even some people’s faces. I skipped through some crappy Facebook-Newspeak posts and found a useful info about how, where and when I could meet Big Brother again.

I decided not to postpone that “Big Date Out”. I booked an appointment for 10th March to lose myself in the world of classics, in the world of Orwell’s 1984 that was bravely adapted and directed by a British brilliant duo – Robert Icke and Duncan Macmillan. (I know for me Auckland Arts Festival this year is all about talented duos). Both of directors are well-known for mischievous theatre creations, surprising storyline twists, fast and furious character-building. 1984 isn’t an exception. They did a great job following their purpose in art-making industry. They adapted the timeless piece of work into a reasonable, thought-provoking, engaging, edgy, dynamic and stylish acclaimed theatre phenomenon that speaks to various audiences.

Seriously, I am sure a 15-year old, who wasn’t even born in 1984, would enjoy the production as much as his grandad who experienced Life to the fullest and also read a book and maybe even watched a movie. I, myself, represent a middle age group who read a book at school as a part of our reading compulsory programme, re-read the book in my 20s and watched a movie 3 weeks ago. And you know what? I enjoyed this adaptation very much, more than a movie. That’s why I came up with a list of things to do and not-to-do before the show that you can find below (Don’t thank me just yet). 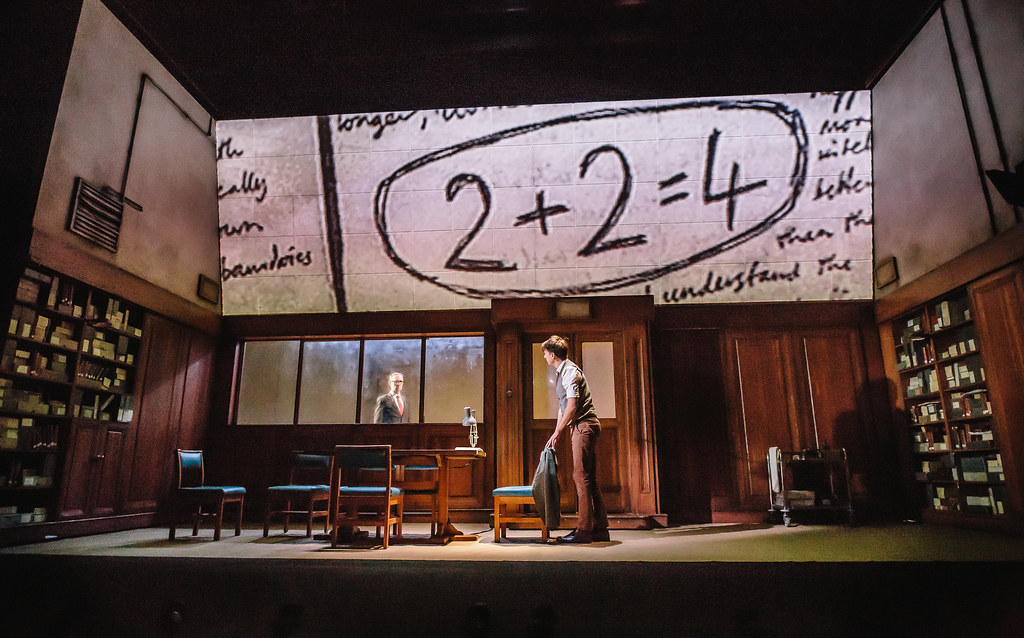 Life is all about the little things and appreciating the small stuff. So I truly enjoyed how we got immersed in the world of 1984 with the help of organisers and “little random things.”

The show starts with a scene where we see Comrade 6079, Winston Smith, in his house who hesitantly starts writing in his diary. Does he want to share his deep thoughts whether with his future self?… future generations…? at least someone else who would care? Will someone care?

I care. And I do care about encouraging you to go and see the play 1984 with your eyes wide open. That’s why it feels like a right thing to stop the review right now and not giving you too much detail. I want you to go and discover yourself how with the help of light, sound, visual effects theatre directors solve the complex problem of multi-layered narrative. Multi-sensory experience adds up just the right amount of “salt and spices” without killing an overall taste of approaching horror that the audience will be exposed to.

The stage set designed by young and talented Chloe Lamford is done smartly and rigorously done. The set is moving along with your emotions and feelings. It is stimulating. The stage feels like a separate living planet that transforms at the critical point of the story and destroys the visual fixed idea of the space you had of it. And it does feel powerful. However, I find that the original set up with multiple bookshelves, brown stylish dining table and chair, is a bit too romanticised and reminds me more of a sophisticated look of 221B Baker Street where Sherlock Holmes resides rather than a place where Winston would live. Although maybe that was an idea too, to show how pretty things may look on the surface and how many cockroaches, ugliness it can actually hold once the walls fall. The appearance of Room 101, on another hand, stroke my heart with its simplicity, brightness and horror it presented. 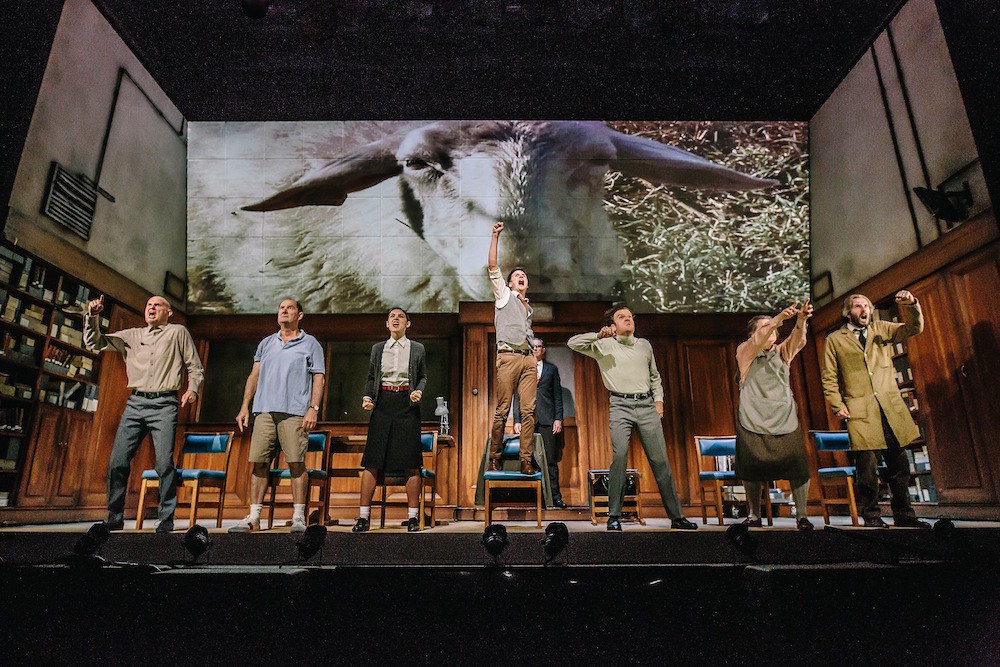 Actors work was on the top level as well. Great energy, performance, tempo and rhythm. If I turn my focus away from lead actors Winston, Julia and O’Brien, the story will be equally strong. There are other yummy characters that create that buzzing feeling in you. The feeling which tells you there is a piece of Big Brother in everyone of us if we let it grow. That manipulative, controlling, oppressive sort of desire to have power even in small acts. One of my favourites is Bill Alert who plays Martin in a play. It feels like someone installs a programme within him and set  the mode “Action.” That action is delivered in small parts in a play and I just loved it. Whether “Victory Gin” has been served, or annoying demonstrative towel manipulation everything adds to that feeling of Big Discomfort that Big Brother plants everywhere you go.

It’s 2018 now. It has been almost 70 years since the book was written and published. The relevance of this piece is overwhelming and I don’t need to brag a lot about it. So many insights, ideas and thoughts that will keep your mind going for a while. The idea of freedom. The idea of the power of thoughts over words; words over actions or actions over words. The idea of equality even in our thinking. I am sure you will come up with your own list of ideas.

It’s 2018 now. And yes, it’s the time some people think that Ignorance is Strength, War is Peace and they believe in our Bullshit Stories that they create with Newspeak. The purpose of the responsible human being these days is to create some space and place for individual thinking, to challenge yourself to find the truth, don’t follow the majority but follow your heart. 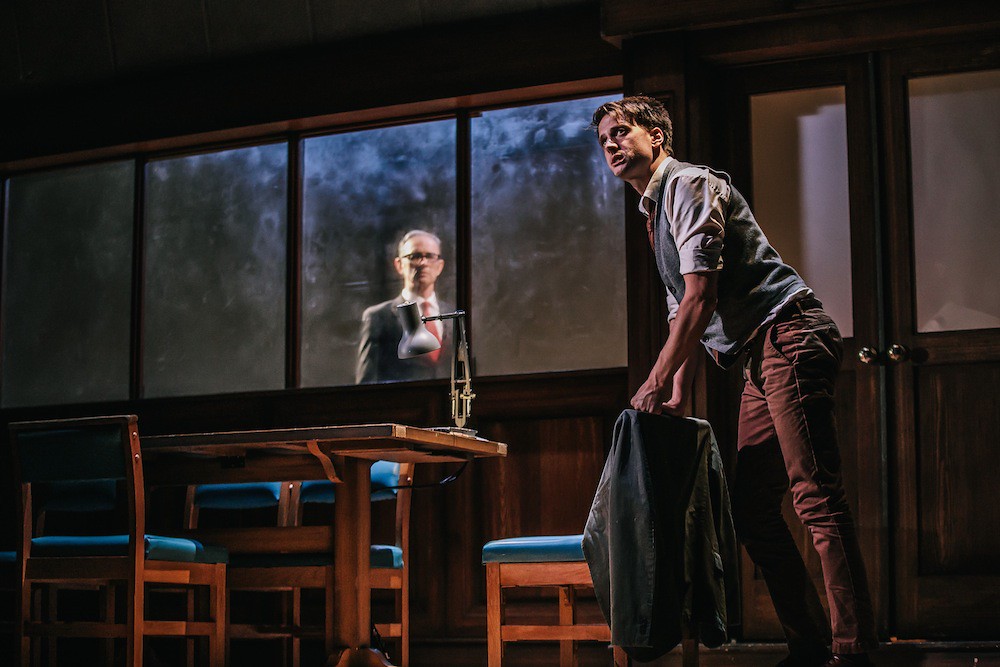 1984 is an uneasy piece of storytelling that needs to be read, watched, played by the majority. Find more about the show here.

THINGS TO DO BEFORE THE SHOW:

read a book or watch a movie

if you are a woman, wear a red dress to the performance

come up with a secret club – group the minority

THINGS NOT TO DO BEFORE THE SHOW

don’t get yourself too full with food or booze (some reviewers say about the audience vomiting and fainting during the performance. No vomit was noticed during the opening night. But it is in my interests to alert you)

don’t betray your loved one, the feeling of guilt might occupy you all over


Warning: in_array() expects parameter 2 to be array, null given in /home/papayast/public_html/wp-content/themes/papaya_stories/single.php on line 44

Is your pool half full or empty?

When Robert Lepage takes you to The Far Side of The Moon.

Welcome more inspiration in your life.

Sign up to receive a monthly e-newsletter packed with inspirational people's stories, podcasts from all around the world, articles to boost your creativity and unique, meaningful and fun events that leave you inspired and joyful!

This Site Is Protected By
Shield →